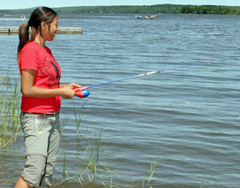 A new study finds many shore anglers on Dane County lakes unaware of fish consumption advisories. Jim Powell with the Madison Environmental Justice Organization says for many people, the amounts of locally-caught fish they eat are greater than recommended in state fish consumption advisories. “When we've talked to folks in our surveys, we've discovered that there's many, many people who eat fish everyday, and sometimes people who eat fish nearly every meal.”

The anglers are often from immigrant communities. Powell's organization has surveyed Spanish and Hmong speaking shore anglers on the Yahara Chain of Lakes, and found few are aware of the advisories, despite the efforts of the DNR. “There's a brochure (explaining the fish consumption advisories) that the state has created, that most people never see,” says Powell. Fish advisories are posted on the lakes, but mostly at boat landings, not at popular spots for shore fishing. “A lot of people just don't understand, or don't believe it,” because the warning are not posted, says Powell. “If those signs were at some popular fishing spots, it would make a lot of difference.”

Panfish like crappies and bluegills generally have lower levels of mercury and other contaminants, but Powell notes that many shore anglers are also catching — and eating — larger walleyes, bass and catfish, all of which will have higher levels of contaminants.