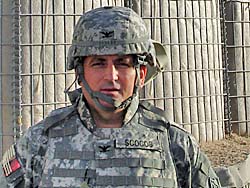 Some of our men and women in uniform are serving their second or even third tour-of-duty in the Middle East, and our state's Veterans' leader is no different.

The colonel in the US Army Reserve acknowledges that thousands of other Wisconsin families are in the same situation.

"Many of our veterans from our state are on their second and third deployments so, I don't feel any different … just trying to do what I think is appropriate."

Scocos, who has over 28 years of combined active and reserve service, will get a first-hand look at many of the issues facing our newest veterans.

Scocos ( pronounce ) says he'll be able to see how things have changed in Iraq from a year ago when the surge was going on. The level of violence looks like it has been reduced, he says, and we see more and more that the government of Iraq is working together with our armed forces.

The veterans' leader will be deployed sometime in September, and will likely be overseas during the U.S. presidential election and change in leadership. As a solder, he says he'll support the Commander in Chief, no matter who it is.

Scocos was deployed for the first time to Iraq in April of 2007. He feels he'll be a little more prepared this time.

"I think I'm more ready this time than I probably was. Other things that I didn't bring along or didn't pack last time I'm going to pack this time."

The 52-year old says his family and friends are very supportive of him. He worries, though, about his 86-year-old mom who's all too familiar with war. Her husband was a prisoner of war during WWII, after being shot down over Europe.

Scocos will miss his wife and three kids: Chloe, 16; Andreas, five; and Costa, two. "I don't look forward to being away from them, but now with the new communications and technology we should be able to be in touch every day."

Scocos will take a military leave of absence, and expects to be in Iraq for 12 months, or as long as he's ordered to serve. Division Administrator Ken Black will serve as the department's acting secretary.