You are here: Home / Packers / A sad day at Lambeau Field! 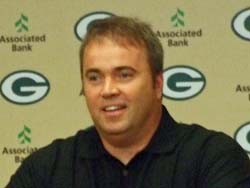 No matter what side of the fence you come down on, Brett Favre's side or that of the  Green Bay Packers , Tuesday was a sad day in Packers history.  For the first time in 16 years, Brett Favre won't be able to call the Packers his team.  He was told as much by the Packers.

Coach Mike McCarthy said Favre didn't have the proper mindset to compete for the starting quarterback job.  Both agreed that the situation had reached a stalemate and agreed that it was best if they part company.  Had Favre decided back in March that he wanted to play instead of retiring, he'd still be the starting quarterback today.  But his indecision is what cost him.  The Packers told Favre again that they've moved on and are going a different direction.  It finally registered with Favre and he's headed in a different direction.

Now that it's a done deal, just think about it.  16 seasons with the Packers, 40 come from behind wins, a franchise record 275 consecutive games started and his ownership of several significant NFL career passing records.  He's coming off a season in which he led the Packers to a 13-3 regular season mark and ended just shy of the Super Bowl.  Now, he's not wanted by the Green Bay Packers.  There's no script for how a career ends.  If there were, it certainly wouldn't be written like this.  It all seems to cold.

Despite the great year that Favre had last season, there were signs that he's not the same quarterback from years past.  I didn't think I'd ever see the day when it was too cold for Brett Favre, but that was the case in Chicago last December 23rd, when Favre looked like he's rather be somewhere else as the Bears buried the Packers 35-7.  Then a terrible second half in the NFC championship game against the Giants, cost the Packers a chance to play in the Super Bowl.

Both sides can share some of the blame for the way this whole ordeal played out, but it's over with now.  Aaron Rodgers takes over in Green Bay and Favre could be on his way to Tampa Bay.  It's going to be nice to focus on football again!