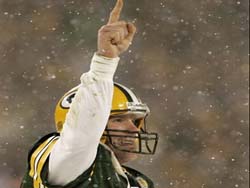 The New York Jets had Broadway Joe in the 60's and 70's.  2008 brings "Broadway Brett" to the Big Apple.  The sports world went to bed Wednesday night thinking Brett Favre was potentially headed for Tampa Bay.  They woke up Thursday morning with Favre being property of the New York Jets.

The Green Bay Packers get a 4th round pick that can easily turn into a 3rd if Favre plays in 50% of the snaps.  The pick could escalate to a number-1, but Favre would have to play in 80% of the snaps and the Jets would have to go to the SuperBowl.  The Packers also gained some protection in the deal.  If the Jets were to turn around and send Favre to the Vikings, they'd have to compensate the Packers with three 1st-round draft picks.

But it brings some closure to the story.  The distraction of having Favre around is now gone.  Aaron Rodgers won't have to look over his shoulder now if things don't work out exactly as planned.

The Packers had dealt with Brett Favre's indecision for the past several seasons.  It was getting old.  When he announced his retirement back in March, the Packers moved on, never again having to worry about the waffling that went on, leaving the team hanging in the balance.

Now it's Aaron Rodgers turn to lead this football team.  We'll see if Rodgers can make Ted Thompson's decision look like a good one or a bad one.  Rodgers first chance comes in the season opener, Monday, Sept. 8 at home against the rival Minnesota Vikings.