You are here: Home / News / Getting tough on drunk drivers 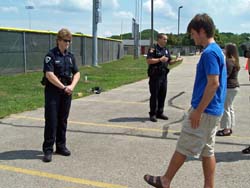 Wisconsin is being called on to get tougher on drunk driving.

The Badger State ranked last on a recent MADD report card for efforts to crack down on drunk drivers. Laura Dean-Mooney, the group's national president, says the state is paying a high price for its inaction, with over 337 deaths in 2007 resulting from alcohol related crashes. Over 5,500 people were also injured during the same period.

MADD wants Wisconsin to require ignition interlock devices for first time offenders and to allow sobriety checkpoints. Dean-Mooney says such efforts in other states have shown amazing results in reducing the number of drivers who get behind the wheel after drinking.

Dean-Mooney says Wisconsin can no longer afford to let first time offenders off the hook as well. She says the average drunk driver has already driven an average of 87 times while under the influence at the time of their first arrest. A state survey also shows that nearly a quarter of Wisconsin drivers have driven while intoxicated at least once in the last year.

Dean-Mooney says the state's current system for prosecuting drunk driving offenses is flawed and needs to be reforms. Her comments came during a drunk driving town hall meeting Thursday in Middleton.