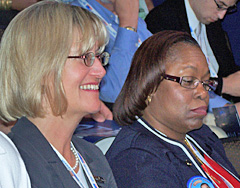 Senator Clinton told her supporters that this election isn't about her, it's about Democrats winning back the White House. She urged all Democrats to support Barack Obama in the upcoming presidential election. Wisconsin Lt. Governor Barbara Lawton says the message was as clear as can be and was perfectly stated.

Lawton says Clinton was gracious in showing her support for Barack Obama. She imagines it was difficult for Clinton to step aside, after coming so close to winning the nomination…but she didn't show it. Lawton described Clinton's speech as strong, joyous, and beautifully done.

Will it be enough to win over her supporters who are hesitant to back Obama? Lawton thinks Clinton made it perfectly clear that Obama is worthy of their support.