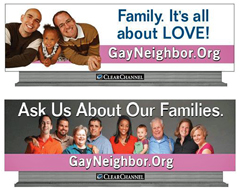 An outdoor advertising campaign in Milwaukee highlights the city's LGBT community. Maria Cardenas is executive director of Milwaukee's Cream City Foundation. She says the 30 billboards and bus shelters are a visibility campaign with a message addressed to the straight community in Southeast Wisconsin: “love family and commitmetment are common values we all have, gay or straight.”

Cardenas says the billboard models are real people who live in Milwaukee and Waukesha. “They feature gay parents and their children,” she says. “We also have gay couples and gay singles, their parents and families. We are using local people. They are our real neighbors, and we believe that there's loving, commited gay neighbors in every zip code in southeastern Wisconsin.”

Cardenas says the billboard project took about a year to develop, and is similar to efforts in other states. The foundation won't reveal how much the campaign is costing.