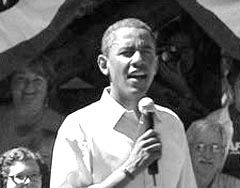 Hosting the “Barbecue with Barack Obama” at an Eau Claire park, Senator Obama was joined by a couple of the state's top Democrats: Governor Jim Doyle and U.S. Senator Russ Feingold.

Obama spoke to about 300 invited guests, a mix of supporters and undecided voters. Obama related John McCain's answer to a question during a recent forum at Saddleback Church: what was McCain's definition of rich? Obama said McCain's answer, five million dollars, indicated he's out of touch with the middle class. Obama vowed to end tax breaks for companies that move overseas: “we will stop giving those tax breaks to companies that invest overseas, and start giving them to companies that invest right here in Eau Claire.”

Obama was not joined by Senator Joe Biden , his new running mate. The two will campaign separately until they appear together at the Democratic National Convention in Denver on Thursday.