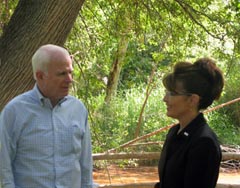 John McCain's running mate brings little experience, but solid conservative credentials, to the Republican ticket. UW Madison political scientist Charles Franklin says, while may of McCain's potential running mates were not exactly household names, Alaska Governor Sarah Palin is virtually unknown in the lower 48: "her big issue is going to be introducing herself, and also convincing the public that she has the strengths that vice presidential candidate normally have." Palin won out over more well known potential VP picks such as Joe Lieberman, Mitt Romney and Tom Ridge.

Palin was elected Alaska's governor in 2006, and her prior experience in office was as a small town mayor. On the plus side, Franklin says Palin is strongly pro life, which will appeal to the GOP's social conservatives. "She also has an extremely strong record on ethics and ethics reform," notes Franklin. "Including opposing the bridge to nowhere in her own state, from her own senator, Ted Stevens."

Franklin believes there will be inevitable statements that the  McCain campaign's pick of a woman is aimed at attracting disgruntled Hillary Clinton backers, "but, you couldn't find someone more different from Hillary, in terms of liberalism versus conservatism."