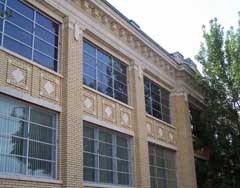 It's a big boost for a Madison neighborhood. Mayor Dave Cieslewicz couldn't be more pleased, as the University Research Park announces a new urban campus just east of the city's downtown. “This could be the spark, that really makes the East Rail Corridor take off,” says Mayor Dave.

The “ urban research park ,” announced Monday by Chancellor John Wiley and Research Park Director Mark Bugher, will make six thousand square feet of space will into ten incubator sites and two conference rooms ready for occupancy by early next year. Unlike the existing research park which is geared to faculty startups, this urban park will be aimed at attracting recent graduates.

Wiley says the space, in the former Marquip Building on East Washington Av., should go fast, based on experience at the existing University Research Park on the west side. “We're just now starting to build another building on our existing research park, in one of the few remaining sites were we could do that. And even before we start construction, it's fully leased up,” says Wiley. “The demand is out there, and I'm very confident it is for this facility as well.”