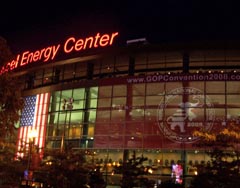 While speaking to Wisconsin delegates Thursday, state Attorney General JB Van Hollen mentioned Barack Obama as one who believes it's government's role to provide happiness for citizens. A philosophy he says differs from what his fellow Republicans believe.

“We are not here to be everything to everybody. We are here to provide the freedoms and liberties to give everyone the chance to pursue happiness.”

Van Hollen says public safety plays a vital role in this. He believes it's state government's role prevent worries of voter fraud, criminals who are illegal immigrants and internet sex predators, so people can pursue their own happiness.

Van Hollen says before he was elected AG in 2006, the state crime lab never processed more than 200 DNA samples in a two month period. He cited figures for the months of July and August at 970 samples.