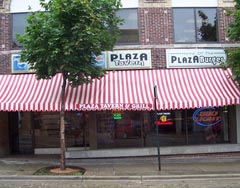 A bar fight in Madison took a deadly turn, resulting in the city's sixth homicide of the year. A 22 year-old man has died after he was stabbed twice in the chest outside the downtown Plaza Tavern, just after 11:30 Wednesday night. A 32 year-old Madison man, identified by police as Justin Stout, is in custody on a potential murder charge.

Madison Police Department police spokesman Joel Despain says investigators don't know yet what led to the stabbing, but that two groups of men had been involved in a fight inside the bar, which carried on outside, and the victim was stabbed twice in the chest. Bar patrons followed Stout to a residence downtown, where officers took him into custody. The name of the victim, who died this morning, has not been released. DeSpain says he was not at student at UW Madison.

By mid-morning, officers had taped off a small city park on State Street, about two blocks from the crime scene, in an apparent search for the murder weapon.