You are here: Home / News / Brewers draw even with Mets, Sabathia does it again 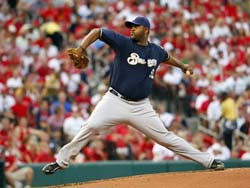 CC Sabathia gave the Milwaukee Brewers another shot in the arm last night.  Pitching on short rest, Sabathia gave up four hits over seven innings and struck out a season-high 11 batters to lead the Brewers to a 4-2 win over the Pittsburgh Pirates at Miller Park.  It's the 11th straight Brewers win over the Pirates and it pulls them even with the New York Mets for the National League Wildcard lead.  The Mets blew a 5-run lead and fell to the Cubs 9-6 in 10 innings.

The Brewers have now won three consecutive games for the first time this month.  Sabathia improved to 10-2 as a Brewers with a 1.78 ERA.  And if the Brewers still are in it on Sunday, Sabathia will once again, take the mound on short rest to try to put the Brewers into the playoffs.

Yovanni Gallardo will make his first start since May 1st, when he suffered a torn ACL in his right knee at Wrigley Field.