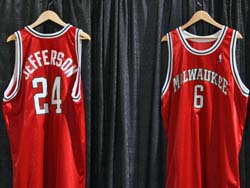 The alternate jersey will be worn as many as 15 times.  The last time the Bucks featured an alternate road jersey was during the 1996-97 season.