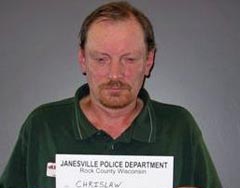 Police in Janesville may have prevented the murder for hire of a member of the city council. Janesville Police Chief Neil Mahan says 46-year-old Joseph Roy Chrislaw, Sr. has been arrested on charges of solicitation for murder. “We set up an undercover officer to have a meeting with Chrislaw,” Mahan says. “Chrislaw provided some details about what he wanted done, and the timing of it, and also provided an amount of cash to the undercover officer, as essentially a down payment for the job.”

The job, according to Mahan, would have has as intended targets this weekend 34-year-old Inna Cheremisina and 33-year-old Janesville City Council member Yuri Rashkin. Mahan says the suspect and Cheremisina are married, but she and Rashkin have a new relationship, which has left her husband, Chrislaw, despondent.

For his part, alleged target Rashkin has nothing but high praise for the police department. “The Janesville Police Department has done an outstanding job,” he says, adding that he had no idea about the plot until police turned up at his door Tuesday. “My goodness, no, not at all. We thought that my situation, as difficult as it was, was being resolved amicably, and we though the other situation was being resolved amicably as well.”

Mahan says the case came together very quickly, once the undercover officer posed as a contract killer and met with Chrislaw Tuesday. Mahan says the murders were to take place this weekend.