You are here: Home / Politics / Govt / McCain makes his case in St. Paul 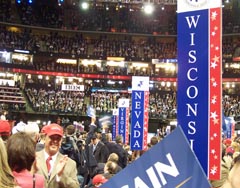 John McCain showed he has the right stuff for the presidency — unlike his opponent. That's the word from State Senate Minority Leader Scott Fitzgerald. “There certainly is a difference between experience, which John McCain has, and Barack Obama does not,” said Fitzgerald. “This is a guy that was in the U.S. Senate for 125 days, before he decided to make a run for the presidency. I think as the American people and Wisconsinites find out more and more about Barack Obama, I think they're going to see that there is a difference between he and John McCain, and I think that Senator McCain tried to drive that point home tonight.”

McCain showed humility but strength. That's what Brian Westrate of the Eau Claire County Republican Party Executive Committee saw in his acceptance speech in St. Paul. “He contrasted himself as much as was possible, I think, with Senator Obama,” said Westrate. “I think he came off with humility, I think he explained why he was running for the job, what he wanted to accomplish. I think he was specific about what he can accomplish.”

McCain emphasized his early support of the troop surge in Iraq which he said has been shown to be successful. “Security is going to be a big part of what this race develops into,” said Fitzgerald. “I'm looking forward to the debates between Senator McCain and Barack Obama, to find out what Senator Obama's response is.” Fitzgerald said McCain's speech emphasized the contrast between himself and his opponent regarding Iraq.

McCain and his running mate, Alaska Governor Sarah Palin, will make their next campaign stop in the Milwaukee suburb of Cedarburg.