You are here: Home / Politics / Govt / Michelle in Madtown 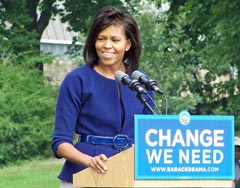 Michelle Obama made a stop in Madison on Monday, and challenged supporters of her husband's presidential campaign to engage with their friends and neighbors on the issues. "This campaign is about the issues, and if people vote on the issues that matter most to them, there's only one candidate that they can vote for," said Obama . "This choice is so clear, but that's why we need you talking."

The Madison event kicked off "Women's Week of Action" by the Obama campaign in Wisconsin. "Women get it done," said Obama, to the cheers of some 1800 people gathered at GAR Memorial Park, near Camp Randall Stadium. "And men help, too. But this race can be decided on our shoulders, as women."

Obama urged the many students at the rally near the UW campus to follow through on their enthusiasm for her husband's campaign, and prove their critics wrong. "No one's counting on you to wake up on Election Day," she said. "They figure you're going to sleep through the whole day, and we've never once believed that. We haven't see that on the campaign trail."

Michelle Obama's appearance in Madison was the first of three in Wisconsin on Monday. She was also scheduled to stop in West Allis and Wausau on a day when her husband is also in the state, with a campaign rally in Green Bay.