You are here: Home / Politics / Govt / Nader wants in on debates 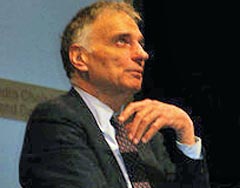 John McCain wasn't the only presidential candidate in Wisconsin on Friday. Ralph Nader is on the ballot in 45 states, including Wisconsin. He's not in the debates with McCain and Barack Obama, but sees no reason why he should be excluded. “I was not dropped in Washington out of a UFO,” he said at the Orpheum theater in downtown Madison. “I've been around a long time, I know the government inside out, and I know how to challenge these two party candidates, because they are full of taboos, full of things they don't want to talk about.” Things, Nader said, like supporting the Palestinian-Israeli peace movement for a two state solution, cutting the defense budget, and cracking down on corporate crime.

Matt Gonzalez, Nader's running mate, was president of the San Francisco Board of Supervisors. So what? Gonzalez pointed out that the city's population is larger than that of Alaska or Delaware, and that he helped manage a six billion dollar budget. “That's nearly twice the budget of the state of Alaska, and twice the budget of the state of Delaware,” said Gonzalez. “I received more votes when I ran for mayor in 2003, then Joe Biden did when he was first elected to the U.S. Senate.

Nader says the only way he and Gonzalez can get their message out to millions of voters is to be allowed to participate in the televised debates, and that's a big reason why he's still on the campaign trail. “I don't like the corporate government in Washington shutting the doors on the ability of the American people to go to Washington and improve their country,” he said. “In the last twenty years or so, the corporate domination of Washington has been a door closer. Except for their own lobbyists, that is.”