You are here: Home / News / Reports: Packers Harris could be out for the rest of year 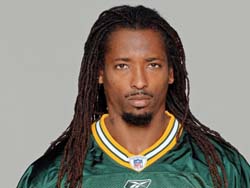 According to various reports, Green Bay Packers defensive back Al harris could be out for the remainder of the season with a ruptured spleen.  Harris and the Packers are reportedly awaiting a second opinion after receiving the initial diagnosis earlier today (Monday).

The Green Bay Press Gazette says Harris suffered a torn spleen and could be out from a few weeks to the season.

Harris suffered the injury after colliding with teammate A.J. Hawk in the first quarter.  Harris left the game, and Packers coach Mike McCarthy said he was not allowed to return because blood was found in his urine.

If Harris is done, Tramon Williams would get the start opposite of Charles
Woodson.  Woodson has been playing with a very painful broken toe.