You are here: Home / News / Rodgers fends off naysayers, at least for now 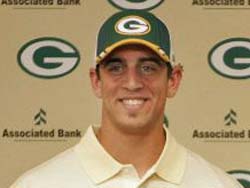 When Brett Favre opened the 2008 season with the New York Jets, leading his team to a win with a pair of touchdown passes, Green Bay Packers fans were ready to jump all over Aaron Rodgers if he wasn't equal to the task on Monday night against the Vikings.  Not only was Rodgers equal to the task, he was better.

Rodgers completed 18 of 22 passes for 178 yards, with 1 touchdown pass and 1 touchdown run.  His passer rating of more than 115 was more than 20 points higher than Favre's performance against the Jets.  Just imagine the pressure of facing a stout Minnesota defense, making his first career start, and doing so on Monday Night Football.  He handled the task with ease, or so it seemed.

I really hope we're not going to continue to deal with comparisons between the two all season long.  Let Favre do his thing in New York and let Rodgers do his thing in Green Bay.  Rodgers handled the Favre ordeal earlier with true professionalism and one shouldn't be surprised that things went so well on Monday night.

Will Rodgers remain near perfect as the season goes along?  Probably not.  I'm sure there'll be some moments that go the other way.  And I know it's only one week, but I really like what I saw from Rodgers on Monday night.  Prior to that game, you really didn't know what you were going to get.  Now I think we know and feel a whole lot better about it.