You are here: Home / Politics / Govt / St. Paul in spotlight 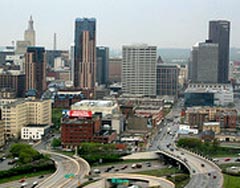 Republicans have converged on a “Blue” city this week. He's a Democrat, but St. Paul Mayor Chris Coleman is not looking a gift horse — or elephant — in the mouth, pleased that his city is hosting the Republican National Convention. It's “an enormous opportunity for the city of St. Paul to put itself on the world stage,” says Coleman. “We have 15,000 reporters coming from around the globe. We have 45, 000 delegates, visitors and other guests.”

There's been plenty of convention spending spread throughout the region, even some lodging in Western Wisconsin. And the RNC's rules and platform committees met last week in the other Twin City, Minneapolis. Conventions mean protesters, and Coleman is convinced St. Paul is ready: he even spent a couple of days in Denver last week to see how that city handled security for the Democratic National Convention.