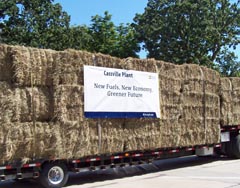 Is a plan to burn switchgrass at a new coal fired power plant a good idea — or is it simply putting lipstick on a pig? At first glance, Alliant Energy's proposal to burn twenty percent biomass at a planned coal fired power plant in Cassville sounds promising. Brett Hulsey is an alternative fuels proponent and an advocate for the Alliant plan. "One study down by UW showed that burning ten percent switchgrass with coal reduced emissions thirty to sixty percent," said Hulsey. Semi trucks loaded with bales of switchgrass formed the backdrop for a rally in support of the plant in Madison on Wednesday. "The key thing about switchgrass and biomass is that it's a convenient solution to global warming and to clean up our air," Hulsey said.

But, under a best case scenario, the Cassville plant would still be burning eighty percent coal, and Charlie Higley with the Citizens Utility Board said staff for the DNR and the Public Service Commission have reached the same conclusions on the proposal: "that the plant is very expensive, that it will produce quite a bit of pollution, and that its ability to even use biomass is not certain." Higley said the plant, as proposed, is also going to be inefficient. "Even if it uses biomass as part of the fuel, the plant is so inefficient it will use a lot of that fuel," Higley said that will offset any improvements that could be realized by using biomass in the first place.

The Public Service Commission is expected to make a decision on the Alliant proposal in December, and Higley notes that while the PSC has never failed to green light a major power plant project, concerns about costs to rate payers and environmental impacts may result in PSC rejection of the Cassville plant proposal. "Originally, Alliant thought it would cost about $800 million to build this plant," said Higley. " Alliant his since increased the cost to $1.2 billion, making it the most expensive coal plant proposed in the United States." But Hulsey said the use of switchgrass and other biomass will produce economic benefits. "We need a lot of different solutions," said Hulsey. "This Alliant proposal really helps jump start that, by driving the switchgrass and biomass market, with their hybrid flex fuel plant."