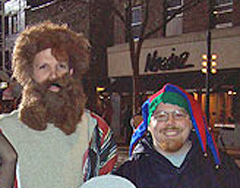 City of Madison officials are making final preparations for Freakfest 2008 — and hoping that once again, the celebration will remain reasonably placid.

“If we can get through another year without problems, we should be in good shape.” That's the thinking of Madison Mayor Dave Cieslewicz on this weekend's Halloween bash on State Street. “One of the issues is that college students turn over, and we're going to get to a point here pretty soon, where there isn't anyone at the UW who remembers the bad old days .”

The mayor says Freakfest is becoming more of a “concert with costumes,” rather than a place to cause trouble. “That's great, and we will have completely changed the whole tone of the event.” Cieslewicz announced last week that rock band O.A.R. will be the headline act for Freakfest on Saturday. Other performances on the main stage include Donavon Frankenreiter, The Hard Lessons, Thriving Ivory and The Dollyrots. Partygoers will have to pay more this year than in the past. Ticket prices will be $7 in advance and $10 the day of the event.

Hundreds of Madison police officers will be piling up the overtime this weekend, and Cieslewicz says he's not overconfident, but he's pretty sure the city is prepared to handle the Halloween celebration that sometimes ended in riots in the past. The cost to taxpayers for keeping the peace? The Mayor says it will be at least a half-million dollars