You are here: Home / Politics / Govt / In La Crosse, Obama focuses on bailout 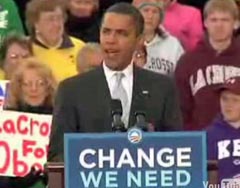 Presidential candidate, Senator Barack Obama, talked about renewable energy and agribusiness, community service and college education. But most of his speech Wednesday in La Crosse was focused on the news of the day: the bailout of the nation's crippled financial services sector. Obama spoke in front of an estimated 15,000 at a rally in downtown La Crosse, describing the risks of not acting to shore up the financial sector. Obama said thousands of businesses could close, and millions of jobs could be lost, if a financial services bailout is not passed. “The fact that we're in this mess is an outrage,” Obama said. “It's an outrage because we didn't get here by accident.”

The Illinois Democrat, on his fourth  recent campaign stop in Wisconsin , said the crisis is the direct result of greed and irresponsibility in Washington and Wall Street. Obama outlined what he would do with any potential bailout, if elected. “I'll demand a full review of this financial rescue plan, to make sure that it's working for you,” said Obama. “If you, the American taxpayer, are not getting your money back, then we will change how this program is managed. If need be, we will send new legislation to Congress, to make sure that the taxpayer are protected.”

Obama said he's proposed a financial stability fee, which would tax financial institutions to cover any losses due to the bailout, and that as president he would continue this fee to build up a reserve fund, to be spent in case of any future financial emergency.

Obama, his running mate Senator Joe Biden and Republican candidate Senator John McCain all return to Washington tonight for a vote one the bailout package.