You are here: Home / News / Leckrone: band culture will change 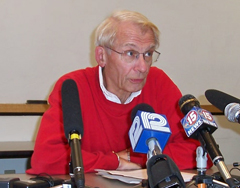 UW Madison Marching Band director Mike Leckrone pledges a new culture in the wake of an investigation into hazing. They will play for this weekend's game against Penn State, but it's been a tough week for the band. Leckrone told a campus press conference that he's embarrassed by events that have occurred on his watch, calling the hazing abuses asinine, disgusting and degrading.

How many members actually perpetrated the abuse is still not clear: neither Leckrone, Dean of Students Laurie Berquam or band Drum Majors, Jon Alfuth and Alex Waskawic would provide that number. “It is a very small number, and a very small minority of the band,” said Waskawic. Also unclear is how many members of the 315 member band may have left due to the abuse. “It's very disappointing that they felt so uncomfortable that they didn't feel that they could continue,” said Leckrone, who said some 60 members had stepped forward to confirm abuse.

Although the number of perpetrators remains unclear, the specific allegations of abusive hazing came into sharper focus during Thursdays press conference. Berquam provided details, including students being made to kneel and bite a sausage, being confined to bus restrooms for hours at a time, and being forced to participate in a game called “mystery door number three” in which blindfolded students were asked to remove lingerie ffrom male band member. Berquam also said there were a number of allegations of underage drinking. She said most of the abuse was committed by upper class band members upon freshmen, and that most victims appear to have been males. Some of the abuse occurred during the band's September 27 trip to Ann Arbor.

Berquam said students have the opportunity to file criminal complaints, but none have yet done so. The instigators will be adjudicated under UW System non-academic misconduct codes 17 and 18. Penalties under those codes can range from a formal reprimand to expulsion, according to Berquam.

The band will be allowed to perform at this Saturday's home game with Penn State, although Leckrone says it will not make a scheduled trip to Green Bay later this month. The band was suspended for last Sunday's home game against Ohio State, the first time in some 40 years that it had not performed at Camp Randall Stadium.