You are here: Home / Business / "Perfect storm" for cheaper gas 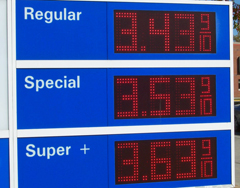 Some locations in Minnesota, not far from the Wisconsin state line, are now selling gas for less than three dollars a gallon. Eric Roth of the Wisconsin Petroleum Council says that's probably coming here. “We've seen some declines here in Wisconsin . . . in the past couple of days,” says Roth. “There are stations in the Milwaukee area that are reporting $3.27. Really, it's because of what's going on in our economy, and crude oil prices.”

Roth says cheaper crude and less demand have created for cheaper gas. “As people tend to drive less, and the economy sputters along, with falling crude oil prices, it's the perfect storm for lower gas prices. We do have a higher gas tax than Minnesota, however there are some that predict we will see falling prices in the next year.”