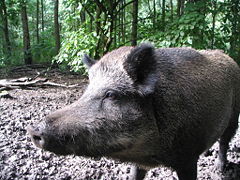 State investigators think they've tracked the source of the outbreak of feral pigs in Wisconsin.

They're believed to have originated with a Texas man, who allegedly released 31 of the pigs into the wild in Western Wisconsin in 2002. 55-year-old Robert Johnson, nicknamed “Bubba,” is currently on trial in Crawford Country for illegally releasing a wild animal. He allegedly set the animals loose because he was upset with state deer hunting rules.

Feral pigs have now been spotted in more than 30 Wisconsin counties. Greg Matthews of the DNR says the animals can wreak havoc on those areas by rooting up crops, killing wildlife, and infecting livestock .