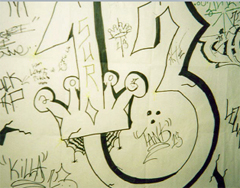 A new report shows an increase in gang activity in northeast Wisconsin. The report  (PDF), from the Wisconsin Department of Justice, identifies 56 gangs in Winnebago County, 43 in Outagamie County and 29 in Brown County. Those numbers may well be low: Brad Dunlap with the Lake Winnebago Area MEG unit says gangs are an increasing problem. They're mainly here to sell drugs, and haven't been very violent – yet. “They understand that they have a market that's not yet been saturated, from the drug proceeds standpoint,” says Dunlap. “They don't have the need to compete for turf, yet.”

Dunlap ays if gangs are allowed to grow, turf wars over drug dealing could break out. “That's our concern, that as the dealers saturate the area, from these bigger cities where there is a heavier gang presence, they'll also bring with them that mentality. Once they establish that base, it's only a matter of time before those groups start to solidify their gang influence, not just their drug dealing influence.”