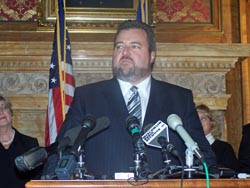 Koschnick says he wants to join the court to fight judicial activism. He says judges, such as Abrahamson, lose their legitimacy when they use their position to legislate from the bench.

Koschnick has been a judge since 1999 and spent 14 years as a public defender. He believes over two decades of experience have prepared him to serve.

Koschnick does share some of the same positions as Abrahamson. He favors a proposal to require special interest groups to disclose their funding and public financing of Supreme Court races. However, he says such proposals should restrict the free speech rights of individuals or groups.

The election is April 7th. No other candidates have announced plans to run.