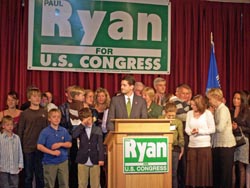 Congressman Jim Sensenbrenner (R-WI) says it's going to be a tough two years in Washington, and Democrats will have no one else to blame but themselves if nothing gets done. The 5th District Republican says the left has been able to put all the blame on President Bush for two years, but that won't work with Obama in the White House.

Sensenbrenner says he'll be watching them closely and the GOP will be ready to win back Congress in 2010.

Meanwhile, Republican Congressman Paul Ryan says the party must be willing to reach across the aisle when Democrats are on the right track. When they're moving in the wrong direction though, the 1st District Republican says the GOP must propose alternative plans, rather than just opposing Democrats.

Both Ryan and Sensenbrenner won re-election in their districts.