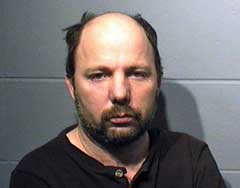 In his first public comment since being arrested for drunk driving and possession of marijuana, a contrite and at times emotional state Rep. Jeff Wood made no excuses for his behavior during a radio interview this morning.

Wood, who was pulled over by the Wisconsin State Patrol in Columbia County Friday morning, spent about ten minutes on the air talking with Bruce Butler, co-host of "The Valley's Morning News" on Newstalk 790 WAYY in Eau Claire. "I'm not trying to hide from this or anything," Wood told Butler. "I made a horrible mistake. I drank way too much. There is really no excuse."

Wood , elected as an independent in November after leaving the Republican party, has been cited for OWI, possession of marijuana and possession of drug paraphernalia. Callers to the radio station were calling for Wood to step down, something he has no plans to do at this point. "I'll talk to the speaker (Assembly Speaker Mike Sheridan) and see what my role will be," Wood said. "I think I've done my job well . . . this is humiliating and embarrassing and obviously it comes with penalties which I deserve. I'm not going to shy away from that, but I think I can do my job effectively."

Butler asked Wood how he came to have the marijuana in his vehicle. "I didn't use any judgment at all," during a night of drinking Thursday, Wood said. "Somebody offered me some and I took it, and for whatever stupid reason got in my car and decided to drive home. It's not typical behavior for me, especially the marijuana part, but I had way too much to drink and did not exercise any judgment, obviously."

Wood — who admitted he'd had an OWI as a teenager — was asked by Butler whether he thinks he has a drinking problem. "Obviously, if I drink beer I lose my sense of judgment, but I don't drink very often," said Wood. "I think it's something I gotta deal with. My wife and I talked about it, and I won't be drinking again or I won't have a marriage." Wood said he has also talked about the situation with his ten year-old daughter.

"I'm going to cooperate fully through the entire process and accept whatever punishment I'm given," said Wood. "I hope people can . . . take a look at me as a whole before passing judgment, and know that this is not typical of me. Not only did I let my constituents down, I let my family down, too."

No initial court date has been set. Wood has released a statement apologizing for his arrest.