You are here: Home / Environment / Conservation / DNR spokesman: deer herd estimates may have been off 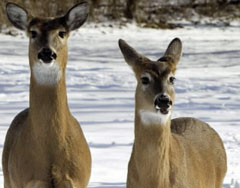 A variety of factors may have contributed to the state's lowest deer hunt harvest in several years. The number of deer killed in Wisconsin's nine-day gun season was the lowest since 2002 – the year chronic wasting disease was first found, and fears about it kept hunters home. Greg Matthews with the DNR concedes the agency's pre-hunt numbers may have been low. “Our best estimates may have been off,” Matthews tells WIBA . “That could have been caused by winter mortaility and fawn production. But let's put things in perspective. I hope a lot of hunters don't overreact. There's still a healthy deer population in the woods.”

According to the DNR's preliminary numbers, just under 277,000 deer were shot in the season that ended Sunday. That's down about 18.5 percent from last year. Matthews says he fielded hunter complaints on herd numbers firsthand when hunting in Lincoln County, noting that some hunters are “vehement” about not seeing deer. “It's human nature to complain that you don't see deer, but it's really such a part of the culture up there . . . a certain minority get really upset if they don't see a deer and the don't shoot one.”

Matthews reminds hunters that deer season is about more than bagging a trophy buck. “Only recently, relatively speaking, do hunters expect to see a lot of deer, and to harvest one,” says Matthews. “The most important thing should be to get together with family and friends . . . and enjoy the great outdoors.”

The state's deer herd was projected be as large as 1.7 million whitetails prior to the start of the hunt.