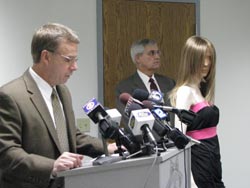 Fond du Lac County Sheriff's investigators hope getting the word out about a possible “Jane Doe” murder victim will help lead to her identity.

During a press conference Monday, Sheriff Mick Fink gave a possible description of the body found in a wooded area last month by hunters. Fink says the victim is believed to have been between 15 and 21-years-old, 4-foot-9 to 5-foot-4-inches tall, and possibly weighed 110 to 135 pounds. Fink says she was also knock kneed, pigeon-toed or both and would have had a distinctive walk.

The victim was either white or Hispanic and had light brown or dark blonde hair that was 10 to 12 inches in length. She was wearing a black and pink Zoey Beth top and Angels jeans.

Police used a woman's mannequin dressed in similar clothing Monday, to give reporters an idea of how the victim may have looked. Fink says the idea was to provide a point of reference for someone who might know the woman. However, the model represents a living, breathing human being who someone misses.

Lieutenant Bill Flood says they are checking with the bigger cities on their missing persons cases. However, he says that can take time. Eventually though, Flood says they will learn who the victim was and how she died.