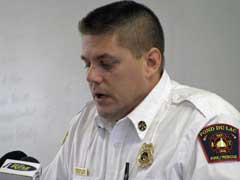 The cause of a fire that killed a 21-year-old Fond du Lac man and displaced others from a 16-unit apartment complex may take time to determine. Police Major Kevin Lemke said they are working with fire investigators and the state Fire Marshal's office, but it will take some time to reach conclusions. “At this point we don't have any determination on what the cause of the fire is,” Lemke said during a press conference Wednesday. “We certainly don't have any information that it's a suspicious fire, but we can't rule that out until we have more time to investigate.”

The victim's body was found in the bathroom of a first floor apartment where the blaze may have started. A woman living in the same apartment was taken to St. Agnes Hospital for treatment of minor injuries. Temperatures around zero hampered efforts to put out the fire Wednesday morning at the Briar Crest Apartments. Battalion Chief John Duffy said firefighters coped with frigid temperatures that at points caused their fire engines to freeze up. “Any time you have the temperatures out there and the wind chill, it really takes a toll,” said Duffy.

Three residents had to be rescued from balconies when firefighters arrived on the scene at about 5:00 AM, and Duffy said they did an outstanding job with that. Although firefighters remained on the scene for hours to make sure no hot spots flared up, Duffy said it took them about 25 minutes to knock down the fire, which also claimed the lives of several pets. Lemke said initial estimates indicate about 18 people were living in the 16-unit complex.