You are here: Home / News / It must have been a triple dog dare 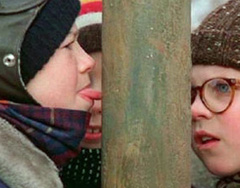 It was a scene right out of the seasonal favorite " A Christmas Story ," at Prospect Elementary School in Lake Mills Thursday morning, as police were called after a 10 year old boy got his tongue stuck on cold metal.

"A bus driver found a kid with his tongue on the bar of a gate going into the school," said Lake Mills Police Chief Kathleen Hanson. "We just took some warm water and got his tongue unstuck," said Hanson, adding that they don't get many such calls. Hanson said the boy's mom, a nurse, had a talk with him. "He is never going to do it again," she said. And yes, just like the character Flick in " A Christmas Story ," the Lake Mills student was back in class after getting unstuck.