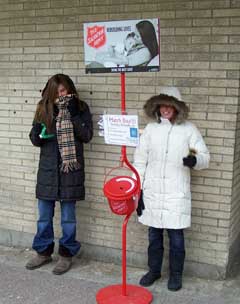 Madison police are looking for a red kettle con artist. Who would steal a Salvation Army kettle? "It's somebody that has to be pretty desperate." That's what Ruth Ann Schoer with the Salvation Army in Dane County has to say about a woman who's accused of stealing three kettles since Wednesday, and attempting to take three more. Schoer says neither she nor the Salvation Army's Major Paul Moore have ever heard of someone trying to steal the red donation kettles.

Now they're taking steps to make sure it doesn't happen again: Schoer says Salvation Army route drivers who pick up the donations will now be wearing photo I.D. Schoer says the woman accused of stealing the kettles is known as a con artist, but isn't dangerous. So far she's pocketed about five hundred dollars.