You are here: Home / News / Closing the door on careless drivers 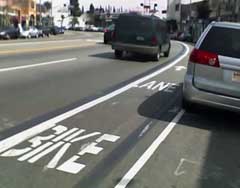 A member of the Madison City Council says the law protects careless drivers, but penalizes those they hurt. “When you're getting out of a car, you need to look to make sure nobody's coming down the street before you open the door” says Alder Robbie Weber, who wants restrictions on opening vehicle doors into oncoming traffic and leaving vehicle doors open while loading and unloading.

Webber began working on the ordinance last summer after cops ticketed a woman who was hit by a car door while riding her bike on a city street. She was cited for bicycling too close to the car. “I think a lot of people were shocked that there was not a law requring that the motorist excercise due dilegence or due care when opening the car door,” says Webber. “I think a lot of people assumed that was the law, but apparently it is not.”

Her ordinance would cover all forms of transportation, including pedestrains. Careless drivers would face a fine of up to $100 dollars. State legislators are considering a similar measure.