You are here: Home / Politics / Govt / Going after OPEC? 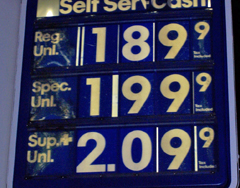 Contending that the international oil cartel is manipulating crude oil prices – and the prices American motorists pay at the gas pump - a Wisconsin member of Congress is proposing legislation he says will address the issue by allowing the federal government to pursue antitrust actions against the Organization of Oil Exporting Countries, or OPEC. Whether any such action would ever be taken remains unclear.

Senator Herb Kohl says his "No Oil Producing or Exporting Cartels Act" or NOPEC, could prevent future price increases of gasoline by authorizing the U.S. Department of Justice to take action against illegal conduct by the OPEC oil cartel. "This legislation will authorize our government, for the first time, to take action against the illegal conduct of the OPEC oil cartel," Kohl says. "The time is now for the U.S. government to fight back on efforts to fix the price of oil and hold OPEC accountable when it acts illegally. Our legislation will hold OPEC member nations to account under U.S. antitrust law when they agree to limit supply or fix price in violation of the most basic principles of free competition."

But Erin Roth with the Wisconsin Petroleum Council questions whether OPEC is solely to blame for escalating prices. "The price of crude, as we've seen in the last year, has been dram dramatically changing up and down," says Roth. "And it's basically been because of manipulation on Wall Street . . . not OPEC" In addition, Roth says it's unclear exactly how the U.S. government would take action against OPEC. "Certainly, you're going up against a juggernaut in terms of oil resources," notes Roth. "It's really unclear as to how the U.S. Justice Department would go about trying to put these people in jail, for potentially trying to manipulate the price of crude oil."

NOPEC was passed by the House and Senate in the last session of Congress, but was eventually stripped out of the overall Energy Bill.