You are here: Home / Politics / Govt / GOP leaders: Get ready for tax increases 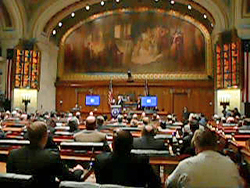 The Republican Leaders in the Assembly and Senate agree that we're in for some tax increases.

Following Governor Jim Doyle's State of the State address, Senate Republican Leader Scott Fitzgerald says Doyle talked about his priorities, but didn't mention what he would do to protect those key items, such as education and health care. The Juneau Republican says it's clear that the governor was trying to prepare Wisconsin taxpayers.

"I think he was setting us up for the tax increases that are coming. The governor painted a picture of doom and gloom … tried to paint this as something where, you know, it's a national issue a federal issue, and as a result of that I think it's going to be difficult."

"No, well, I didn't hear from the governor. I don't know if you did, but I would have liked to hear him say we will not raise taxes to solve this budget deficit, but I didn't hear those clear words come out of his mouth tonight. So, hopefully that's not where they're heading but you know he said everything's on the table and that can be encouraging but that remains to be seen."

Jeff Fitzgerald says in Doyle's speech there weren't any details about how Doyle plans to create jobs, trim down the size of government or reduce the tax burden on hardworking families in our state.