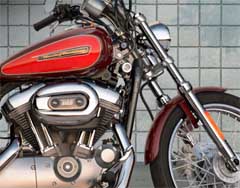 With sales of its iconic motorcycles plummeting, Milwaukee based Harley-Davidson will cut 1,100 jobs over two years and scale back its operations in Wisconsin and Pennsylvania, part of a a three-part strategy to weather the economic downturn which has dampened consumer confidence and the market for big ticket items such as motorcycles.

Harley plans to consolidate two engine and transmission plants in Milwaukee into its Menomonee Falls plant, close a distribution facility in Franklin, and downsize paint and frame operations in York, Pennsylvania. A Harley press release states that company earnings have fallen 58%, or 34 cents per share, to $77.8 million, from $186.1 one million, or 78 cents per share, last year. Sales fell almost seven percent over that period, and wholesale shipments of motorcycles were down over eight percent.

For 2009, Harley plans to ship between 264-thousand and 273-thousand new motorcycles, a 10 to 13 percent reduction from 2008, and will also end its domestic transportation fleet.