You are here: Home / News / Obama touts change, does that include shoes? 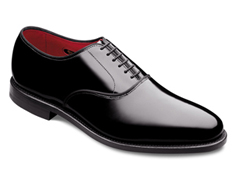 The previous five US presidents have been fans of a high-quality Wisconsin-made shoe, what about number 44?

Every president from Ronald Reagan to George W. Bush has worn Port-Washington-based Allen Edmonds shoes to their inauguration. Did president Barack Obama continue that tradition?

Governor Jim Doyle is in Washington for the festivities.

"You know, I don't know the answer to that and I've actually been trying to make sure he's aware that there are still good shoes made in the United States at Allen Edmonds. I was wearing Allen Edmonds so maybe that'll make up for it."

The company that makes upscale men's shoes sent Obama various sizes and widths so the new president could find the best fit of formal-wear shoes for his 11.5 D size, but at last word, company officials weren't sure whether Obama wore their shoes for any part of the inauguration ceremonies.

Allen Edmonds has been manufacturing shoes in Wisconsin since 1922.