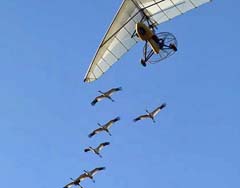 Another successful guided migration for a group of endangered cranes from Wisconsin. They're called the class of 2008: fourteen endangered whooping cranes left Wisconsin's Necedah National Wildlife Refuge in October. Now, all fourteen are in Florida, after an 88 day trip in which the young birds were guided by ultralight aircraft.

Liz Condie with Operation Migration says the latest success brings the total eastern migratory population of the endangered birds to 88, towards a total goal of 125. Condie says the birds came through the 1200 mile trip with flying colors.

Many of the whooping cranes that take part in the ultralight migrations from Necedah are hatched at the International Crane Foundation in Baraboo. The reintroduction program is now in its eighth year, with an eventual goal of reestablishing a breeding population of the birds. Condie says the financial and moral support of Wisconsin residents has been crucial to their success.