You are here: Home / Legislature / Speaker encouraged by Governor's message 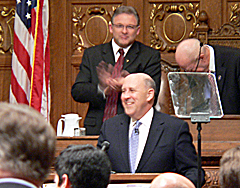 The Speaker of the state Assembly says he's encouraged by the Governor's State of the State message of collaboration.

The Governor asked lawmakers to work together in the coming months to overcome a $5.4 billion budget deficit. Assembly Speaker Mike Sheridan (D-Janesville) says it was a good strong message about the Wisconsin spirit and what needs to be done to get through some tough times.

The Governor renewed his call for a statewide smoking ban and insurance coverage for autism. Sheridan says those can be accomplished, but he believes a close look at a statewide ban is needed to see how it will impact small businesses across the state.

Sheridan was not surprised by a cool response from lawmakers when the Governor asked for tougher drunk driving penalties, especially when it comes to sobriety checkpoints. The Speaker says lawmakers realize something needs to be done to combat drunk driving, but opinions vary greatly on how to accomplish that goal.

Sheridan was not surprised the Governor left out proposing any new spending initiatives. He says there's no need to "paint a rosy picture" when the state is facing tough times.