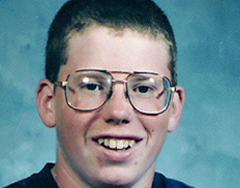 Today marks the 10th anniversary of the unsolved  hit & run death of a 17-year old from rural Manitowoc. Richard Hochstettler, a junior at Lincoln High School, was struck and killed while walking on the shoulder of County Trunk CR, near his Town of Newton home, during the early-morning hours of January 10th, 1999. WOMT interviewed Manitowoc County Sheriff Rob Hermann and Richard's mother, Debra Hochstettler, about the case.

Manitowoc County Sheriff Rob Hermann, a lieutenant at the time of the crime, said literally hundreds of tips have come in to his department and to the Hochstettler family's website. “You try and follow up on all these leads and you keep coming up empty handed,” said Herman. “We'd love to get any more information on this case, and obviously, solve this case and give some closure to the family.”

At the accident site, investigators found a small piece of grill from a 1985-to-'88 Chevy Blazer, Suburban or pickup truck. Hermann said they followed up on leads, but nothing panned out. Even with that evidence, investigators faced a daunting challenge. “We did do a check, and obtained over 12,000 registered vehicles of that make, model and type,” said Hermann.

Debra Hochstettler says her son was at a friend's home and was a little late on his curfew. He died 200 yards from his residence, south of Manitowoc. A newspaper carrier came upon the accident about 2:30 AM and notified the sheriff's department. Hochstettler said she would like to complete her healing process. “In order to finish that, I need, not necessarily for the judicial system (to work), because that will never bring my child back,” she said. “But to know that this person is stepping up to the plate to do the right thing and helping us out. They've had ten years of freedom, now give us some.”

Sheriff Hermann said it was snowing at the time of the hit-and-run, but the offending-motorist had to know they struck someone. “We had several grill pieces (as evidence)” he said. “I'm sure at least one of the headlights had to be damaged. They had to know there was damage.”

Grill pieces were sent to the FBI for testing, and the state Division of Criminal investigation assisted in the probe. A $26,000 reward has been offered in an attempt to solve the crime. Hermann said anyone with any information on the hit-and-run death of Richard Hochstettler should call the Manitowoc County Sheriff's Department at 920-683-4201, or if they'd prefer to remain anonymous, contact CrimeStoppers at 920-683-4466. To learn more about the case, you can go to the family's website .