You are here: Home / Agriculture / White House as farm house? 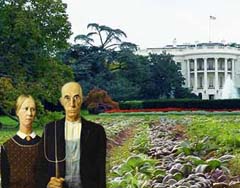 An effort to raise awareness and promote growth of organic farming wants 5-acres of the White House lawn to be transformed into an organic garden, and a special “White House farmer” appointed to grow it.

The proposal, though it has not been accepted by the Obama administration, has already drawn 40 nominees for the position from across the nation, and Wisconsin is second among all states with 7 contenders. Organic specialist and co-founder of the Cornucopia Institute , Mark Kastel says yeah, it’s a gimmick, but it could do some good. “There’s a lot of good things that could happen,” says Kastel. “It would be a nice demostration project, and an intimate way that Mr. Obama could connect with the farmers out here in the field.”

Kastel adds lawns in general may not be the best idea. “It is really misappropriation of our natural resources, and very bad for the environment,” he says. “Per square foot, there are way more agri-chemicals used on peoples lawns than are ever used on farm crops.”

Nominations and voting for the White House farmer position are open at whitehousefarmer.com until January 31st, at which point the top three vote-getters will be submitted to President Obama.