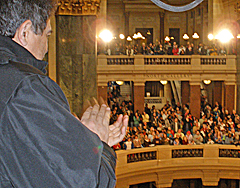 Wisconsinites commemorate the life and legacy of Dr. Martin Luther King Jr., celebrating his vision of equality, freedom, and justice for all. Lt. Governor Barbara Lawton sings the praises of a leader of the nonviolent civil rights movement.

"His life was a civilizing force in our nation's history. He taught us that a democracy cannot endure when all of its citizens do not enjoy equal rights and protection."

As Americans observe the 80th anniversary of King's birth and celebrate the Inauguration of the first African American U.S. President, Lawton says we should be inspired by two men determined to serve, while insisting it's not about them, but about us.

"It is we the people who are ultimately accountable for what happens here in this building and in the nation's capitol in Washington D.C."

Lawton reminds us that President-elect Barack Obama asks us to heed King's question: 'What are you doing for others?'

"So in the name of Dr. Martin Luther King let us all become accountable for making his dream a reality for the children of this state and nation."

King was assassinated in 1968.

NOTE: The US holiday is observed on the third Monday of January each year; King's birthday was January 15.

Because MLKjr Day is a federal holiday, there is no mail, and banks, the stock market, libraries and schools are closed.