You are here: Home / Brewers / Brewers sign Hart, give Gagne another shot 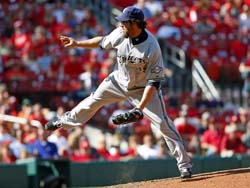 The Milwaukee Brewers avoided an arbitration hearing today with rightfielder Corey Hart, agreeing to a 1-year deal on Tuesday worth $3.25 million.  The Brewers were offering $2.7 million and Hart was asking for $3.8 million.  The two sides met in the middle.

It means Brewers general manager Doug Melvin keeps his record in tact of never having a case go to an arbitration hearing since he's come to Milwaukee.

The Brewers also signed reliever Eric Gagne (pictured) to a minor league contract with an invitation to the Major League camp.  Gagne signed a 1-year, $10-million deal last season but started poorly and ended up ont he disabled list.  Gagne was 4-3 with a 5.44 ERA with 10 saves in 50 appearances last season.