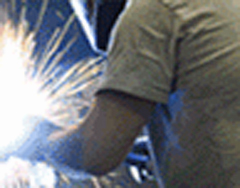 “We received notice on January 22nd of this production reduction by Cummins, and since they're fifty percent of what we sell, we were stunned,” says Roessler, who adds that as recently as six weeks ago, United Alloy was projecting sales were to be increase by twenty percent for 2009.

Roessler says they've instituted some changes, including 12 layoffs, a wage freeze and elimination of overtime, and a 32 hour work week for some employees. Roessler says she didn't think they'd affected by the global depression for another year. “I thought that I had probably, honestly, about 12 to 18 months before I would feel anything,” she says. “In the last two weeks I have hit a wall.”