You are here: Home / Legislature / Cuts and targeted taxes 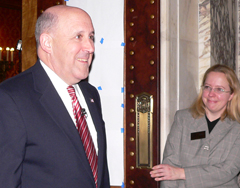 Governor Jim Doyle goes after the rich, the oil companies, and smokers in his proposed state budget. Doyle calls for deep cuts in state spending – $2.2 billion worth – deepest in state history according to Doyle, who also says he has no plans to increase middle class taxes. “My budget stands up for the people who earn regular paychecks, and the people who through no fault of their own, have lost theirs,” the governor told a joint session of the Wisconsin legislature Tuesday night at the Capitol in Madison.

Doyle proposes three targeted taxes to help address the $5.7 billion deficit. If you're still getting a paycheck – make that a hefty paycheck – Doyle wants an additional one percent tax on incomes of over $0300,000 dollars a year. “If you're like 99 percent of Wisconsin, you won't pay this tax,” Doyle said to applause from Democratic lawmakers. Wisconsin, said Doyle, is the only state with an income tax that exempts sixty percent of capital gains. His second targeted tax would lower the exemption to forty percent of capital gains earnings, which Doyle said is “still one of the most favorable exemptions in the country.” And third, Doyle wants an assessment on profits by big oil companies. “These companies make money when people drive on our roads, so it is appropriate that they help maintain them,” said the governor, adding that the state “will go after companies that break the law, by passing (the costs) of that assessment on to consumers.”

Doyle said his proposed budget will do more than simply close the state's staggering budget gap. “Under this plan, we will finish the biennium with a positive balance of 270 million dollars,” said Doyle. “We will put our tax collections in line with our future spending commitments, and cut what is called the structural deficit to the lowest level in ten years.

The Governor also wants to increases the tax on a pack of cigarettes by 75 cents. “I hope that's a tax we don't collect for very long,” he said. “The purpose here is to stop kids from smoking, to help people quit, to include public health, and to drive down our state's health care costs.” The governor also renewed his call for a statewide indoor smoking ban.

Doyle also called for new measures to attract and retain talented employees. “We can make sure that domestic partners who work for the state have access to benefits,” said Doyle, who also said committed couples should have hospital visitation rights and the right to take leave if one has a serious illness. “I don't want the state to stand in the way of someone being able to care for their longterm partner,” said Doyle. “And I don't want the state to be less competitive at our university and other institutions, because we don't treat people fairly.”