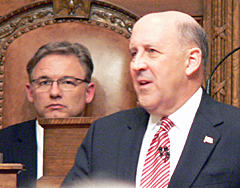 Legislative leaders say Governor Doyle's budget shows just how hard it will be to close a $5.7 billion deficit.

Assembly Speaker Mike Sheridan (D-Janesville) says some of the proposals will require a closer look and the "devil's in the details" that will be examined in the coming months.

Senate Majority Leader Russ Decker (D-Schofield) says the governor should be able to get most of what he wants. However, Decker says some proposals, such as a statewide smoking ban, may require a little more work than others.

Decker has advocated a smoking ban that includes a phase-in period for taverns. Doyle's proposal would have it take effect statewide two months after the budget is approved.

Both Sheridan and Decker are unsure if they'll support a proposed 75 cent hike in the cigarette tax. Decker says it may be a little higher than he'd prefer. Sheridan says he hasn't made a final decision yet on if it's the right number.

Decker says a proposal to close several DMV and DOT service centers is worth considering as part of efforts to reduce state government where we can.